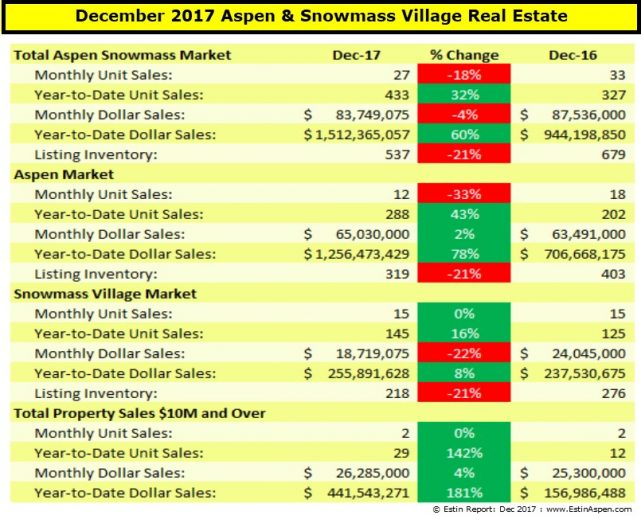 Dec 2017 ended on a weak note compared to what was to an outstanding year. A disappointment in fact. But maybe this was the reprieve we needed after an exceptionally strong three months in August, Sep and Oct ’17.

Standout categories for the month of December are:

3) Where are the Aspen Discounts? Checkout areas a bit farther out of town but more than compensating for the ‘relative’ distance are the staggering views and high mountain scenery. This is ‘Rocky Mountain High’ living at its best at sub-prime pricing!  Giddy-up folks!!  For example, Starwood had (2) sales in the three months of Oct-Dec 17 at an avg $624 sq ft vs $616 sq ft same period a year ago, +1%.  The caveat: these sales were for older homes selling essentially at lot value, but for reference, compare this to the avg. (3) downtown SF home sales +31%,  $2,227 sq ft in Oct-Dec 2017 vs $1,704 sq ft in the same period last year. Another example is Woody Creek where home prices over $1.5M are still relatively discounted at $1,310 sq ft in Oct-Dec 2017 versus $963 sq ft same time last year. +36%. See Best Deals for Starwood/McLain Flats and Woody Creek properties.

4) Snowmass Village values: SMV is entering its prime winter selling season Dec – April, and unit sales activity has been picking up similar to 2015.  The revived Snowmass Base Village under new ownership is completing some major construction projects and the base area if starting to look and feel more finished than the construction site its been for the past 10 years. There is a lot of excitement and positive energy while at the same time,   SMV opportunities continue…in general, prices – at 40-60% discount-to-Aspen –  are similar, if not down incrementally, from last year.

Deep Dive: Dec 2017 for Aspen real estate sales by Aspen and Snowmass location and neighborhoods…For more, download the full 10 pg report from link to the right of page.