Released online as PDF on Feb 7, 2015 v6.5. The 4th Quarter is Oct 1 – Dec 31st. The print edition is available after Feb.19th on racks around town, the airport, and outside the Sotheby’s offices at 415 Hyman Ave Mall and 300 Spring St (my office) opposite the Aspen Art Museum. 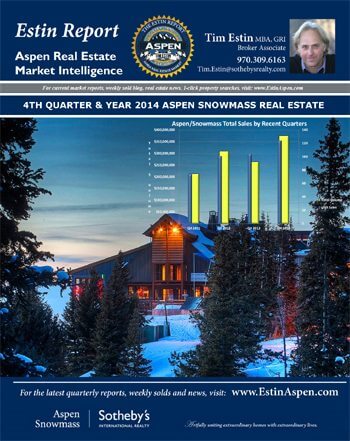 2014 is the best performing year for Aspen Snowmass Real Estate since 2007. Along with positive economic news across the country, a strong and confident Aspen market has returned.

And the momentum continues…Jan 2015 has been the best January in seven years. 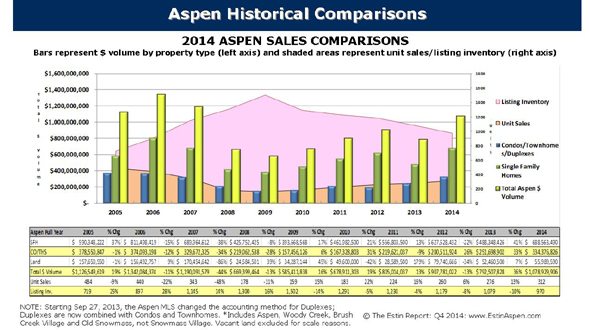 A continued decline in Aspen listing inventory is becoming an issue especially in specific market segments. New and like-new product is in short supply and high demand. Historically solid locations such the West End, Red Mountain and the Aspen Core are seeing incrementally rising home prices. And well located condos with high walkability scores and/or locational advantages – near the Gondola, those with Aspen Mountain views, directly on the river – are selling well.

For buyers in general, high quality choices are narrowing.

After essentially a 5-year “pause” in new residential construction, activity is returning full speed ahead in 2014. Some factual and anecdotal indicators are: 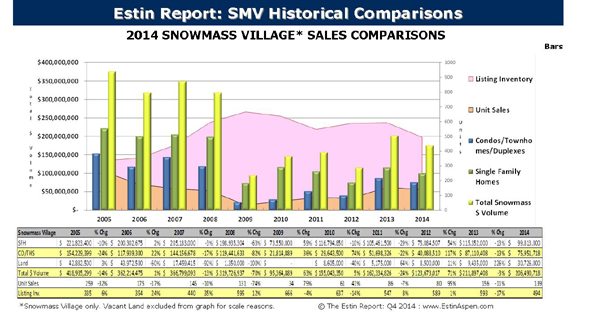 SMV condo sales fell 30%, from 118 sales in 2013 to 83 in 2014, due largely to fewer Viceroy Hotel and Condo sales year over year. Their sales program launched aggressively in early Jan 2013 with 60% discounts from pre-recession prices, and the fall off is due to the natural maturation of that program. The success of the Viceroy sales has brought well-needed attention to the entire SMV condo market and as a result, sales expanded to other condo complexes while Viceroy sales dropped off. (A phase II Viceroy program is in its late planning stage.)

In general, prices in Snowmass Village are still down as good values persist compared to Aspen. But inventory is falling suggesting the window for deals may be narrowing.

Disclaimer: The statements made in The Estin Report and on Aspen broker Tim Estin’s blog represent the opinions of the author and should not be relied upon exclusively to make real estate decisions. A potential buyer and/or seller is advised to make an independent investigation of the market and of each property before deciding to purchase or to sell. To the extent the statements made herein report facts or conclusions taken from other sources, the information is believed by the author to be reliable, however, the author makes no guarantee concerning the accuracy of the facts and conclusions reported herein. Information concerning particular real estate opportunities can be requested from Tim Estin at 970.309.6163 or by email. The Estin Report is copyrighted 2015 and all rights reserved. Use is permitted subject to the following attribution with a live link to the source: “The Estin Report on Aspen Real Estate.”