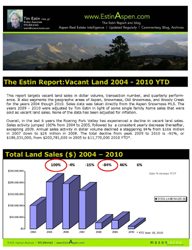 "At present, vacant land sales are generally moribund for a variety of reasons previously noted. Most importantly, it is because: 1) buyers perceive they can buy new finished product – single family homes – at less than replacement value; 2) credit doesn’t exist and builders/developers have been cut out of the market.

Because there continues to be sufficient inventory of great homes available for purchase, although rapidly thinning, and not to mention the hassles of the permitting and building process with a particularly onerous Pitkin County Land Use Code, buyers, in general, do not want to buy land and build at present. In addition, credit markets continue to be locked up making many land purchases all but impossible.

Buyers sense that the “hidden” land costs are being discounted within the overall sales price of finished product whereas only recently are actual vacant lots getting realistically discounted on the retail end. A buyer of a new single family home is effectively paying wholesale for land and benefiting greatly from the bad economic environment of builder/developers stuck with product.

When the cost of land combined with construction costs (now off 20-30%) is markedly cheaper than buying a new home, at say $900 – $1,100 sq ft, vacant land sales should theoretically start to pick up. This, and the freeing up of bank funds for new construction, should be the inflection point when vacant land sales turn.

On McLain Flats, a 13 acre parcel with abundant water rights, amazing mountain views and 10-15,000 sq ft home and barn approvals sold in the spring for $4.5M to another end user who will build their dream home. There are currently 2vacant lots on Trentaz Dr that if purchased together represent 24 acres with vested rights to build up to 19,000sf FAR priced at $5.95M (reduced from ($7.95M) or, individually 11 and 13 acres, priced at $2.975M each. (reduced from $4M ea.)

Double Bar X/Stage Rd a new Aspen subdivision of 1-3 acre lots near the Maroon Creek Club sold during their early 2007 launch between $4.5M- $6.8M. In summer and fall 2009, there were 3 sales of these lots at $3M-$3.2M with a ‘bonus’ lot thrown in as a second purchase to one buyer at $2M. According to Randy Gold, a well-respected local appraiser, “it’s tough to know how much values in this project, and in the market at large, have really declined but 25-50% seems reasonable”

There are some fantastic lot deals now, and those in the know are waking up to this.