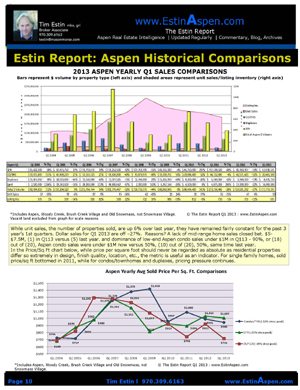  A surge at the end of the year 2012 in big ticket $10M+ sales motivated by anticipated 2013 tax-changes seems to have taken the wind out of high-end Aspen dollar sales in the 1st Quarter 2013.

 Instead, market activity has been dominated by smaller-sized and under $1M property sales and a flood of new Snowmass Base Village Viceroy condo sales selling at 60% off pre- recession prices since their sales program was re-activated Dec. 15, 12 after a 3-year market hiatus due to litigation issues and the recession.

 Yet, in light of the positive trending economic news throughout the country – a record level stock market, strong real estate performance on both coasts and especially in NYC and the Hamptons – it is a puzzle why the Aspen market has not performed better in Q1 2013.

 Historically, the Aspen market has been last in, first out of recessions but presently, we appear to be trailing other high end markets.

 The big difference between this quarter and the same period last year is the significant increase in lower end sales under $1M, the lack of big ticket (+$10M) sales and a gaping hole of inactivity in the $5-10M sales range.