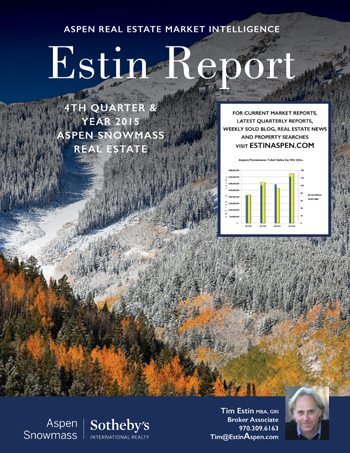 The Aspen Snowmass real estate market continued its march upwards in 2015, a continuation of favorable national economic trends lifting us convincingly away from the recession. The local market started its certifiable climb in Feb 2014, and since then it has been consistently strengthening.

Prices on average have yet to completely surpass the pre-recession peak. However, in some specific neighborhoods such as the Aspen Core, Red Mountain and the Historic West End, the hot zones, certain properties have exceeded peak prices by as much as 20-30%; in other areas, we are still playing big catch-up, most prominently in Snowmass Village where prices are -38% off peak and selling in general at half price to Aspen.

New Construction Sales – Much in Demand

The other notable change in 2015 has been the dominance of new-built home and new or like-new remodeled condo sales.

The absence of new construction during the 2009-2013 recession has created significant demand for new or like-new product that seems almost unquenchable. But… buyers are still discerning …the fact that something is “new” is not enough in and of itself. New product needs to be of sufficient high quality, in a 5-Star location, have unique characteristics to command the highest prices and to sell within the least amount of time. There are a number of newer projects that have yet to sell for reasons such as unrealistic pricing, lessor quality location, and site-specific perceived negatives. Or, as a seller will say…it just hasn’t found the right buyer yet.

• Money is still cheap. Although roughly 60-70% of all Aspen real estate transactions are cash, interest rates are still at historic lows.
• For buyers, there may be an increasing sense of urgency to get in before rates and prices take off.
• New built product is the most expensive class of property, and as these properties are sold, price metrics across the board will and are being pushed up.
• Vacant land prices are on the rise. Vacant land dollar sales increased from $86M in 2014 to $117M in 2015, up 36% while unit sales fell 20% from (44) sales in 2014 to (35) in 2015. Land costs more this year than last – it’s a lot more difficult to find good deals in 2015 compared to 2014. Developers are cleaning out the “deals”.
• Buyers perceive our market as a solid long term safe harbor, if not investment, to own and enjoy property here…a place where they see themselves spending more and more time.
• Aspen’s unique natural setting and beauty combined with world class amenities puts it in a league of its own for a US mountain town.

Disclaimer: The statements made in The Estin Report and on Aspen broker Tim Estin’s blog represent the opinions of the author and should not be relied upon exclusively to make real estate decisions. They do not represent the opinions or statements of Aspen Snowmass Sothebys International Real Estate. A potential buyer and/or seller is advised to make an independent investigation of the market and of each property before deciding to purchase or to sell. To the extent the statements made herein report facts or conclusions taken from other sources, the information is believed by the author to be reliable, however, the author makes no guarantee concerning the accuracy of the facts and conclusions reported herein. Information concerning particular real estate opportunities can be requested from Tim Estin at970.309.6163or byemail.The Estin Report is copyrighted 2015 and all rights reserved. Use is permitted subject to the following attribution with a live link to the source:“TheEstin Reporton Aspen Real Estate.”