Released 02/03/2014 v1.Market Snapshots are released on or about the 1st Monday of each month. 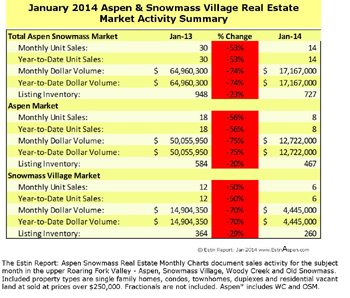 The Estin report ran thecombined Dec. 2013 and Jan. 2014 numbersand compared them to the same period a year prior.

The fall-off in sales in Dec. 2013 from the year before was attributed to the record number of deals that took place in Dec. 2012 motivated by changing tax rules in early 2013.But other than spectacular snow conditions that gave us fantastic skiing over the 2013/2014 Holidays – likely taking priority over Aspen property shopping – it is a puzzle at present whyJan. 2014faired so poorly as well.

…Maybe that is enough of a reason…the skiing has been so good, who has time to look at properties?

One thing is for sure: everything looks so incredibly beautiful with all the recent snowfall, who would not want to live here ?!

Disclaimer: The statements made in The Estin Report and on Tim Estin’s blog represent the opinions of the author and should not be relied upon exclusively to make real estate decisions. A potential buyer and/or seller is advised to make an independent investigation of the market and of each property before deciding to purchase or to sell. To the extent the statements made herein report facts or conclusions taken from other sources, the information is believed by the author to be reliable, however, the author makes no guarantee concerning the accuracy of the facts and conclusions reported herein. Information concerning particular real estate opportunities can be requested from Tim Estin at970.309.6163orEmail him.The Estin Report is copyrighted 2014 and all rights reserved. Use is permitted subject to the following attribution with link to the source: “TheEstin Reporton the Aspen real estate market”