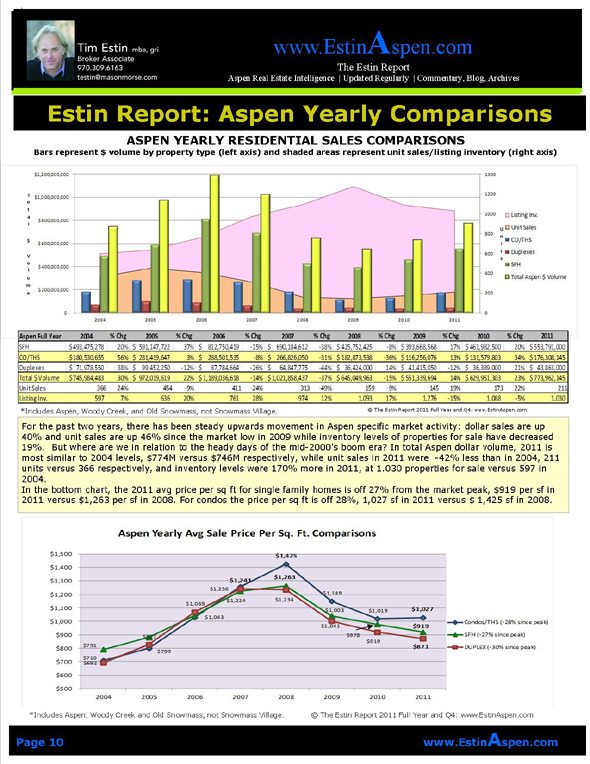 Scroll down page for prior week’s market activity. If this site is of value, choose Tim as your broker, refer others, click “Like” above. THE ESTIN REPORT:… Read More

The “big news,” said Coldwell Banker Mason Morse Aspen broker Tim Estin, “is the dramatic fall off in activity for the month of February compared to the prior month and the prior year.” Estin’s monthly analysis found just 14 real estate sales in the upper valley in February 2012, totaling $30.65 million. That’s compared to 23 sales of $105 million in February 2011, and 23 sales of $80.61 million in January 2012. It was the weakest February in the last four years since the economic downturn began in terms of dollar volume...Despite positive national economic news and building consumer confidence, Estin guessed that there were three main culprits for the February drop-off: lack of snow locally, the specter of a Greek default continuing global uncertainty, and Wall Street bonuses for 2011 being down by 20 to 30 percent. By Catherine Lutz, March 11, 12, ABJ Read More

Scroll down page for prior week’s market activity. If you like this site, please refer others and click the “Like” button above. THE ESTIN REPORT: STATE OF THE ASPEN REAL… Read More 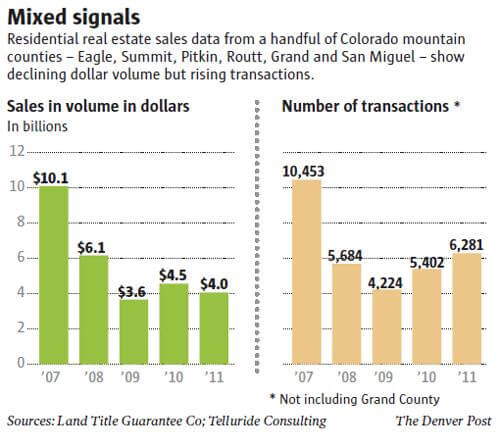 A different type of value hunter is propping up the market in Pitkin County. The county as a whole endured a flat year, but the high-end markets in Aspen and Snowmass Village saw dollar volume climb 15 percent and transactions climb 25 percent. The two tony enclaves saw 16 sales over $10 million in 2011, compared with only 10 in 2010."High-end buyers realized they could get great value," said Aspen broker Tim Estin, who writes a quarterly market analysis called the Estin Report. "What was once $30 million was selling for $15 million or $20 million." Signs for January 2012 are varied. San Miguel County saw the slowest January in several years, with 24 sales stirring only $9.6 million, compared to January 2011's 33 sales worth $25.3 million. But Aspen-Snowmass saw a very strong January, with 29 deals worth $98.26 million. That's up from 20 deals worth $79.48 million in January 2011, a month that floated hope for a rebound after a dismal 2010. "But back in January 2011, there was just as much positive news as this past January, so while I'm optimistic, things could be derailed just as they were last year," Estin said. By Jason Blevins, March 4, 2012, Denver Post Read More

Scroll down page for prior week’s market activity. If you like this site, please refer others and click the “Like” button above. THE ESTIN REPORT: STATE OF THE ASPEN REAL… Read More