Enter the most complete address possible in the field below. Then click the "GoTo" button.A list of Roaring Fork Valley zip codes appears below the map. {mosmap} Roaring Fork Valley Zipcodes The following list of zipcodes is provided to help you in your property search. Read More 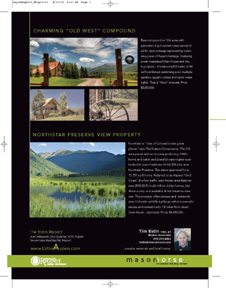 This is a “Best” Aspen properties list in noteworthy categories on the market summer 2012. It is not a complete list and there will be properties not mentioned here that should be. As the Aspen Snowmass real estate inventory turns over, the list will change. For more information on these… Read More

By Tim Estin mba, gri  | Mason Morse Real Estate, Aspen |  970.920.7387 office Oct 28, 2008 (Updated from the original article, Mountain Business Journal, January 2nd, 2007) Immediate Market Highlights: Our market may have slowed but it has not stopped … we are not immune but we are insulated. Here’s what Aspen property is moving now. The overall theme is “ instant gratification” sells Superb, Aspen in-town locations and drop dead new remodels and new construction Trophy purchases, $$ seemingly no object. Realistic priced properties with motivated sellers who understand marketplace conditions and realities. Great perceived ‘value’ buys. Buyers are absolutely more discriminating than ever. West End single family homes: transactions are off -20% YTD, but off -50% from the peak YTD 2006. However, price/sq ft is higher; new product is selling; people want to be in-town, walk to everything. Aspen downtown core sales have plummeted, down 70% YTD, -76% 3Q08 and -61% below the lowest YTD 2004 Snowmass Village (SMV) single family home activity is on the uptick as sellers mark down prices and inventory begins to move. New Snowmass Base Village sales YTD have been off the chart upwards. Unknown: if developers and builders start to capitulate, how will it affect existing home prices and sales? Read More

Click Here to Search By Criteria A search tool is in process of development at present. In the meantime, please follow these steps: 1. The link above will take you to my company’s, Mason Morse Real Estate’s, website, the #1… Read More

“I am in the real estate industry and I deal with many brokers. I can honestly say Tim Estin is the hardest working broker I have ever dealt with. It was a pleasure working… Read More

For Aspen’s gold-plated economy to continue to purr along in 2008, thousands of wealthy people will need to once again decide to build or buy large expensive Homes, entertain lavishly in those homes, purchase luxury goods such as jewelry and art, and continue to spend freely in the local resort marketplace.

While there are signs that some Americans may now be hesitating before making such decisions, there may be other off-setting factors, including the fact that even Aspen’s real estate prices may now look like a bargain to European consumers.

Designing, approving, building, selling, buying, maintaining and using large luxury homes in Aspen, Snowmass Village and Pitkin County is the main economic engine of the Roaring Fork Valley.
And one of the leading indicators for that sector of the economy is real estate sales.

Through November 2007, there was $2.3 billion in real estate sales recorded, according to Land Title Guarantee Co.

And it appears as if 2008 might bring a slight chill to the local market, which is still very robust, if not surreal.

Consider that just five years ago, the amount of annual real estate sales in Pitkin County was “only” $1.2 billion.

“We’ve seen a weakening in the numbers of sales and in dollar volumes compared to where we were in 2006,” said Randy Gold, the president and owner of Aspen Appraisal Group Ltd., who recently completed a year end analysis of the Aspen and Snowmass Village real estate markets. “2006 will probably remain the record year, but so what? It doesn’t mean that 2007 was bad and it doesn’t mean the 2008 will be bad.” Read More